Ring side seats at 1812, Bournemouth 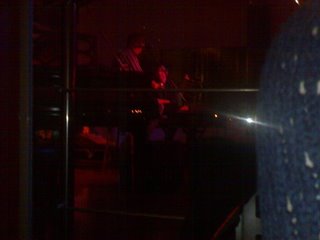 It was a funny kind of evening, and I'm not sure it was just the Rioja. MissClick and I decided that a meal out was in order to celebrate, well, Friday. We went to 1812, a restaurant bar which forms part of the Royal Exeter Hotel in Bournemouth and named after the date Captain Tregonwell set up shop on an empty stretch of the South Coast and founded Bournemouth (or something like that). The hotel already boasts "Bar So" which was hyper chic when it opened. With Bar So acting as a honeypot for the crowds, it seems that the sophisticati have now moved onto 1812, and to other bars which have raised the definition of cutting edge cool. Bar So gets on with the slightly more bouncy activities very well and is still a fistfull of notches above your mainstream clubs and bars.

Anyway, 1812's restaurant is at the back of the bar and we were given excellent seats by the stage (which is actually in the bar area, but seperated from the foodies by only a glazed wall and the music is piped through). Aside from enjoying the fantastic company (she reads this occassionally you know), I spent an evening experimenting with engineering solutions to the water feature by our table, that was decidedly lacklustre. 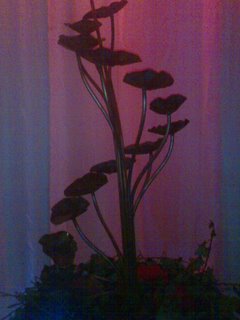 It was the sort of menu you would expect. No huge surprises, but then, that's not what this place is about. I'm not a great food critic, but the Tempura prawns and Lamb went down a treat (the tenderness of the lamb is worth a mention however). MissClick's gravalax looked a bit stingy to me, but the steak was apparently done to perfection. The puddings HAVE to be mentioned- an Eton Mess in a tall knickerbocker glass and a Creme Brulee without fault.

To add to the merriment of the waterfeature's shortcomings, there was a waiter (otherwise excellent by the way) who was having one of those nights with his wine glasses and some ClickFriends through in the bar who did their best to damage the self esteem of the musicians (a keyboard and guitar combo) by walking out after their first song. I'm sure it wasn't personal and they just had somewhere to be :) Good to see you guys.

I think that the 1812 website risks being misleading. If you look at the "people galleries" you might be led to believe that 1812 is more raucous than it really is. To its disadvantage I think. This is because the websites, phones and emails of the hotel, Bar So and 1812 are very intertwined and the pictures are actually almost entirely from Bar So. Don't get me wrong, I like Bar So for a loud and lively night, but 1812 is the place to go and enjoy the company of your friends. It's by no means dowdy or quiet for all of that.

Bar So used to be great. Very chilled out even when it was busy. Not sure having all those flyers stuck to the main windows does it any justice.