My Moment with the Brazilian Prime Minister... 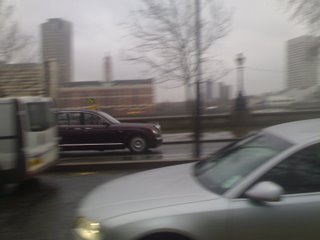 ...lasted all of a split second as their convoy rocketed along Victoria Embankment, London. At the junction with Temple Avenue I saw the cavalcade of bikes running ahead to close the next junction and the constellation of blue lights as the mass of vehicles approached. I was going to edit this photo, but I think its 'point and click' nature says it all about our lengthy discussions about politics and football. Is the PM a man or a woman? No idea.

Only when I picked up the Evening Standard later that evening did I put two and two together and return to the picture to confirm it was a Brazilian flag on the vehicle (which I believe belongs to the Queen). I'm glad we saved them the tube fare.