It's good to be wrong sometimes 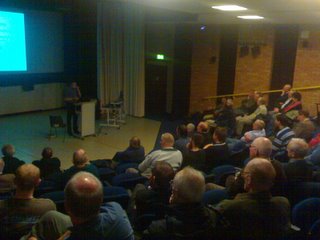 After spending weeks publicising last night's "45 Million Miles from Earth" lecture by Paul Marsh, how do you think I felt for the 53-strong audience to be told on the first slide that the title is wrong? Well, quite pleased actually.

At the point of the talk's conception a month or two ago, Paul's achievements were indeed to have detected a signal from the Mars Reconnaissance Orbiter at a range of about 45 million miles. However, the audience were treated to a "hot off the press" type description of how, with the aid of the Flight Refuelling Amateur Radio Society and their larger dish, he had now picked up signals from the European Space Agency's Rosetta at a range of 242,730,000 miles from earth. To put that into context, Rosetta is nearly twice as far away on the other side of the sun as we are on this side of the sun. If you stopped off at the sun for a burger and coke, you'd be only about a third of the way to your destination.

Discussions are afoot to see if we can arrange for the presentation to be made available to those unable to attend.

Paul described how he was inspired by the two 'gods of radio' Freddy (ON6UG) and James (G3RUG) but I got the feeling that, with M0EYT, we were in the presence of a third. Thanks very much Paul. A fantastic presentation which (according to the official feedback) was enjoyed by radio enthusiasts and members of the public with no technical background alike.