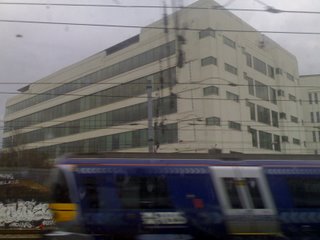 When I was an excitable young engineer I was sponsored by a company who was, if you listened too carefully to management, hamstrung with having to work in some run down old buildings in West London. Everything was considered a constraint or a chore. There were some much heralded concrete spalling works intended to buy us a few more years in this dreadful hole. On a recent trip on the Heathrow Express I was able to take a trip down memory lane and saw one of these buildings- Phoenix House. Just as I expected, it is really run down. Just like I remember it was, but with smashed windows to boot.

But then, I saw something amazing. A far sighted developer has seen the buildings for what they really are- prime examples of Art Deco architecture. One of the sister buildings (it used to be called Vulcan House I think) has been turned into highly desirable office accommodation. I wonder if they've kept the name? By the way, I think I got lucky with the blur of the train on the Great Western (Hail Brunel)- it adds to the pic. 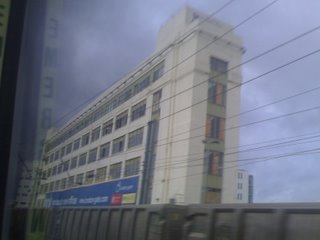 If I remember rightly, this is the building where microwaves were first discovered or applied, being part of the EMI "His Master's Voice" factory complex bordering Blyth Road, Hayes which turned from producing gramaphones and music, to churning out munitions in the First World War. Activities then broadened into other areas of Defence engineering until the 1990s under the names ThornEMI and Thomson-CSF. These buildings tell quite a story, including employing royalty (perhaps a later blog), it would be a shame to see them disappear when they can be put to such good use.

The manufacturing facilities and management suite was in a building called Apollo which is currently in the same sorry state as Phoenix House. Just a glance on Google Earth (513015N002537W) and you can see the extent of the redevelopment by the cool new car park layout and the whiter-than-white lick of paint. I wonder whether all the buildings are scheduled for redevelopment?

When will Phoenix rise from the flames?