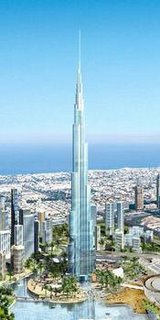 You know when your body involuntarily expresses your emotion even when there's no one around to see it? Pointless. Why do your motor neurones not know this? Anyhow, I just found myself in a room on my own with my jaw dropped in wonderment as I surveyed an artist's impression of something really very special. The current tallest building in the world, Taipei 101, is by 2008 to be rendered little more than a footnote in architectural history. It was only through some last minute high jinx of adding a rather tall viewing platform that it pipped the previous holder to the record. Pah. Now, let's play oil-rich-nation Monopoly for a moment and take Taipei 101 AND stand the Chrysler Building on top. Now you're approaching what is being constructed at the rate of a storey a week in Dubai- the Burj Dubai. Unlike the corporate backed tallest buildings of the last few decades, the Burj Dubai will be a relatively trivial hotel and residential complex. For a city which already boasts The Palm, Jumeirah and The Palm, Jebal Al, they really do have something to prove in the UAE about their rapid rise to global prominence.

Yes, it's amazing, but personally I'd be concerned at how the level of attention required to build their mere 18 page website is projected onto the 160 storey, 705 metre high giant. On the website, click on "Downtown Dubai" followed by "Burj Dubai" and a hyperlink appears to the same website as you're currently looking at- but pops it up in a new window. Terrible. I hope that when I step into the bathroom in my 120th floor apartment that I don't step out again into the foyer of the Boulevard Crescent next door.

I initially enjoyed the website for avoiding the cliched profile of the building's silhouette compared against the other tallest buildings of the world. It was refreshing for them to put aspiration before the stats. However, in the end I found myself wanting the numbers and loathing the marketing. Where are the numbers? How big? How tall? How many rooms? It makes you wonder what the thinking behind the site is. It's too patronising for a direct sell. It's subtler than that. I think it's fanning the egos of prospects by attempting to provide an insight into how the great unwashed will be in awe of their "vision" and "resources" affording them "the opportunity to live in the world's tallest building". Interesting, because that's not quite how I tick.