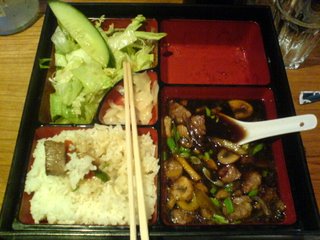 If I'd asked you to guess where I'd have ended up for a Mothering Sunday meal in York, the category with the fewest votes would have probably been "Japanese". So, I was pleasantly surprised to find myself chowing down some sashimi in York's Buzz Bar on Sunday evening.

It was a great meal which everyone seemed to enjoy- even those new to the delights of benti, teriyaki and tataki- although I think I was the only one to have any raw fish. That's right. It's not all raw fish!

What was a surprise was to see flyers in a Japanese Shop in Coppergate, York advertising a Leeds Sushi restaurant called SiSushi. Not a wasabi about Buzz. I wonder how two such synergistic businesses in a modest sized city have avoided joining forces in some way.