I K Brunel a Frenchie? 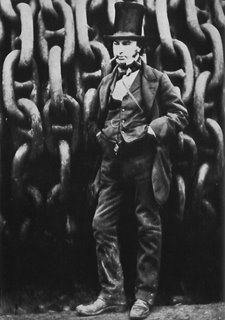 Well, sort of... I was reading about the 200th anniversary of Isambard Kingdom Brunel's birth and was quite surprised to see something I didn't know. Not because I know everything, but that I'm interested in Brunel's achievements and I'd have thought I'd have known this particular thing.

Before my two readers inundate me with post about being xenophopic, I'd like to put in context what I'm about to say by referring to a recent TV series where I K Brunel was voted by the public to be the 2nd Greatest Briton ever- only losing out on the top spot to the worthy Sir Winston Churchill. Also, bear in mind the healthy rivalry (with a few noteable exceptions) between the French and British through the ages.

Well, what I read, if you hadn't guessed it, is that I K Brunel was the son of a Frenchman. If it weren't for the French Revolution, when his parents fled the country, he would have been born in France. Indeed, he returned to study Engineering in Paris. With hindsight, his name isn't exactly what you'd call Anglo-Saxon.

OK, now that business is all out in the open, let's all calm down and remind ourselves that he was actually born in Portsmouth- but don't tell the people of Southampton... Oh no, you can't win!
Posted by Richard Atkinson at 10:12 pm