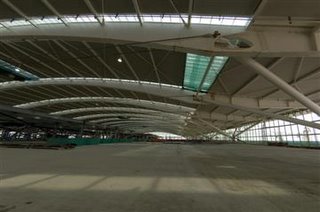 A major milestone in the world of Airport IT has been announced by BAA, the owner of Heathrow. At 73% completion, the T5 programme (the largest construction project in Europe) has reached a state where common IT infrastructure is being married to core systems. One of the main things which makes an immense building an airport is IT... yeah yeah, and planes- I'll give you that!

In the case of T5, there's an awful lot of IT. NTL have laid the cabling as a common infrastructure and now things get REALLY interesting. For example, a private mobile phone network is being implemented rather than handing this over to a public operator to ensure 100% coverage. Public operators will rent their usage from BAA (no doubt a handy revenue stream over the building's lifetime).

In an interview with Silicon.com, Nick Gaines, Head of Systems for T5, the strategy of the IT phase is to minimise risk. He says T5's IT systems "represent the largest risk to the project". Therefore, no unproven technology is being used. I'd like to see how this theory translates into practice. I'd have thought that some of the technologies will be in unproven space by virtue of the scale of the operation. There is a purpose built test centre, managed by Ultra, to qualify systems interfaces before installation, but I don't know how much of role it played in volume and performance testing. I've no doubt that the procurement has been rigorously justified, but I'm excited to see how the Sonic ESB software will perform. This software will support the Service Oriented Architecture by managing message exchange in real time. I'm a big fan of this sort of XML based messaging, but as an innovative product, I think the T5 team will be working hard to derisk the likelihood and consequences of any performance issues. At least they have a long run in to soak test the systems through to Operational Readiness- the airport opens on the 30th March 2008, 6 months after commissioning of systems.

Good luck!
Posted by Richard Atkinson at 10:28 am