But first, a point of order... 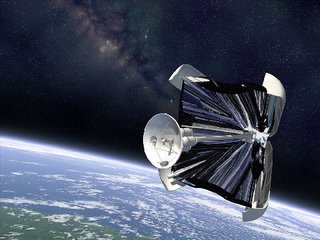 In this, the first of the 2006 programme of IEE Lectures in Bournemouth, Radio Ham Paul Marsh describes how he built and used a home made receiver to sucessfully recieve signals from NASA's Mars Reconnaissance Orbiter transmitting in X-band at a staggering range of 45 million miles from Earth. As NASA's New Horizons' mission to Pluto gets underway, for how long can amateurs keep pace with the space race?

PS. If it really is just Eugene you would like to see, I believe he's "explaining things in a down to earth and fun way" at The Studio, Hawth Theatre, Crawley on the previous day.
Posted by Richard Atkinson at 1:22 pm

Big thanks to Zoe at IEE HQ for coordinating the 'official' publicity. Great job.

UPDATE... Paul will be bringing the hardware with him to the presentation.