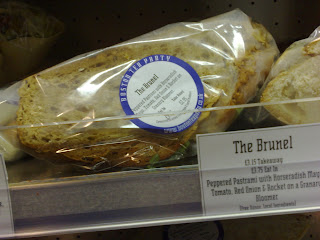 Regular readers will know the hallowed reverence with which I acclaim engineering heroes of yesterday. They will therefore understand how delighted I am that, perhaps, the greatest engineer of his time Isambard Kingdom Brunel has been at last been given the accolade of having a crusty bloomer named after him. About time too.

Congrats to The Boston Tea Party cafe in Exeter who have put The Brunel sarny together. Exactly what a peppered pastrami with horseradish mayo, tomato, red onion and rocket in granary has to do with the son of a Frenchman who designed ships, bridges, tunnels and railway stations is anyones guess. Fortunately, The Boston Tea Party do a great Latte, so they can name their sandiches what they like!
Posted by Richard Atkinson at 9:26 pm